Fishers face countless challenges, from keeping up with the ever-changing fishing rules to finding the best locations and using the right gear. Apart from these known problems, there’s a growing issue for many recreational fishers in Western Australia: shark bite-offs or shark depredation.

What Exactly is Shark Depredation? 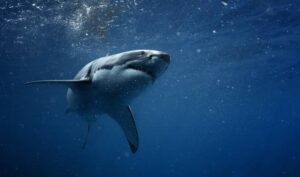 Shark depredation is nothing new but has become quite a significant issue in recent years. WA is the world leader in researching shark depredation, which shows what a considerable challenge it is for anglers across the state.

Shark depredation is essentially a shark, either partially or completely consuming fish caught by fishing gear. This happens before the fish is retrieved. Anglers call this phenomenon “shark tax.” It’s easily distinguishable from post-release predation, which is sometimes known as facilitated predation, where sharks consume fish that fishers have already released.

The problem with shark depredation is that it can occur even outside hook and line fisheries. Net and trap fisheries can be a significant source of fish mortality by up to 26%.

WA is rich in sharks with various species, including white sharks, whale sharks, northern spear tooth or northern river sharks, and grey nurse sharks. All these sharks are protected by the WA government against fishing and capture. Sharks are large creatures. Naturally, they need to eat lots of fish to survive. When sharks eat fish still attached to fishing gear, it’s merely a natural event occurring countless times every day in several parts of the world.

However, shark depredation is currently viewed as a conflict between humans and wildlife. Although natural, this interaction may continue to rise in number in the future. Shark depredation can lead to more issues, such as:

Shark depredation is a legitimate concern. For one, target fish species can go lower as sharks snatch their prey. As a result, more fishing gear will be deployed, particularly in areas where high depredation takes place. Some researchers have also expressed concern regarding the concealment of extra mortality, with commercial fisheries hiding the occurrence of “shark tax” in their logbooks. In line with this, the caught fish, which is later consumed by a shark, is not accounted for in recreational daily bag limits.

Other concerns are raised in studies where depredation alters the energy that sharks naturally use to hunt for their food. Shark depredation enables sharks to feed on fish that are not only easy or within their reach but also cause them to eat something they usually do not feed on.

In previous research, sharks were discovered to be attracted to the sounds of boat engines and anchor chains. While the sounds and vibrations are associated with groups of humans catching fish, sharks quickly recognise that they are not targets of these boats. This may have resulted in the attraction of sharks to the noise, which they may use as a signal for the availability of easy food.

Studies conducted in Ningaloo Marine Park prove the above point. Researchers found that lemon sharks approach a baited camera several times more in areas where anglers go fishing regularly. Meanwhile, only a few sharks tried to capture prey in sanctuary zones. Another study showed that shark depredation occurred at about 40% of recreational fishing activities with more than 11% success rate of catching the hooked fish.

Studies confirm that fishing does not remove sharks; instead, depredation rates increase over time. These sharks rapidly associate recreational fishing trips with instant or at least easy food rewards for them.

The question is simple: Is there a way to prevent a further surge in shark depredation rates in WA waters? If so, how? 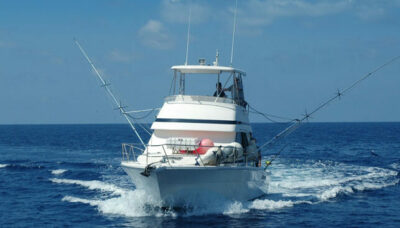 The government has proposed a trial where commercial line fishers, specifically operating in Pilbara and Gascoyne, should opt not to release a small number of sharks caught. Sharks taken can be sold as a by-product and should be restricted for local consumption. This proposal aims to kill two birds with one stone: first, to enjoy more economic benefits for the commercial fishing industry and second, to lower shark depredation rates.

For more than 12 years, shark fishing has been banned in the state. However, the government plans to lift the ban, particularly in the north-western portion of WA. The main reason why shark fishing was prohibited was overfishing. With the speedy population growth of the species, the proposal for commercial fishing could help protect fish stocks, as well as the state’s tourism.

Several fishing groups have shown support for the proposal to take shark by-catch, which may aid in scientific research for shark depredation efforts. Additionally, the sharks caught could provide ample supplies to local fish and chip markets, specifically in Kimberley, Pilbara, and Gascoyne regions.

Could This Amount to a Shark Cull in WA?

Some organisations think so. Recfishwest, a local group representing about 750,000 amateur fishers in the state, argued that removing the shark fishing ban has no hard scientific data to back up the purported benefits. Additional research is still required, as there are a few other reasons to avoid keeping sharks after capturing them.

Anecdotal evidence seemed to indicate that seven out of 10 fish get consumed by sharks after they have been caught by fishing gear. Refishwest’s chief executive suggested acquiring more data to arrive at a good decision, in the end, including:

The WA Fishing Industry Council (WAFIC) understands the need to control shark depredation. The group supports the proposal but not in its entirety. Peter Jecks, a former professional shark fisher who later pioneered the Shark Bay’s blue swimmer crab fishery in 1998, disagrees with the plan’s efficiency.

He later stated that catching and capturing sharks may not make any difference. Sharks have no use for human consumption due to heavy metal content in sharks, so it’s not a commercially viable plan. The government may not support selling shark fins, which further proves that the catch is unviable.

Meanwhile, Don Punch, WA Fisheries Minister, released a statement that he understood how shark depredation caused numerous issues for fishers and the ecosystem. However, he also stated that its prevalence might be a result of the increase in the number of people engaging in recreational fishing.

Don Punch suggested that any depredation reduction measures should be adequately considered, not just for the shark population as a whole but specific species, as well. For years, shark fishing was allowed in WA but has been prohibited for more than a decade due to the declining shark population. Some shark species are still recovering from the impacts of shark fishing in the state.

Now, a more critical question is this: will returning to commercial shark fishing lead to a shark cull? Some organisations seem to think so. By definition, a cull’s purpose is to reduce the population of any wild animal (sharks in this instance) through a process known as selective slaughter. As argued by certain groups, shark culls are not effective, not to mention immoral. Many sharks are not interested in destroying boats and ruining WA’s industry.

Some also argue that more than 100 million sharks are killed every year across the world. Meanwhile, sharks kill anywhere from five to 15 people each year. Comparing these numbers, it looks like humans are the bigger predator. Another huge issue that some proponents of shark culling cannot answer is the method of killing, which can result in harming other animals like dolphins and turtles.

Putting forward a lethal trial where sharks will not be released upon capture can lead to a bigger problem. Jeff Hansen, the national director of Sea Shepherd, firmly rebuffs the bid for a scientific trial involving sharks because of the possibility of the plan to spread nationally.

It does make sense. After all, shark depredation is not just a WA problem. If the trial is approved and WA successfully reintroduces commercial shark fishing, other states might follow suit. Organisations call for fishers to look for better alternatives that do not involve lethal methods to mitigate shark depredation. 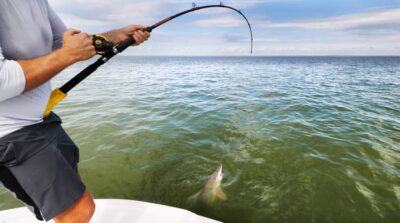 The impacts of shark depredation are real, but there are other ways to alleviate the problem instead of killing sharks through commercial shark fishing. Environmental groups, researchers, fishers, and the government work together to find the best alternative without harming animals. Currently, the WA government-led investigations for new technologies are designed to deter sharks without the use of force.

Gary Jackson, a fisheries scientist, has continually tested several devices that utilise the power of magnetic forces and electric fields. He also uses acoustic recordings of orcas, which are known as sharks’ nemeses. His ongoing study is conducted at various locations and has since been on trial in many parts of the state, as a few other groups have joined his search for an answer. This research has identified about half a dozen shark species that have a bigger propensity to consume hooked fish.

The particular study above by Dr Jackson is an integral part of learning more about the behaviours of these aquatic creatures. It should be noted that researchers do not know the exact species of sharks involved. The partial study has revealed a mixture of species of different sizes, including smaller ones that are not fished commercially can consume hooked fish. Meanwhile, even grey nurse sharks, one of the highly protected species in the Australian waters, take their prey when it’s readily available.

Some fishing styles may need to be changed, as well. For example, if you use multiple hooks on your fishing lines, this causes several fish to struggle on one line at the same time. Their movements and numbers will draw attention to sharks. Also, you end up losing all the fish in one go.

Bait fishing through a burley trail is not recommended. And if you have not upgraded your fishing lines, it’s time to invest in newer, more robust gear.

The WA Government has also proposed a few methods to reduce the shark tax phenomenon through:

Three deterrent devices were tested which were:

Unfortunately, they were not successful in stopping the occurrence of shark depredation. But there’s good news. Using the devices lowered the probability of fish lost to sharks by almost two-thirds or 65% compared to fishing without the deterrents. That’s significant progress, especially as the tactics do not involve harming the animals. The effectiveness of the repelling devices utilised was influenced mainly by the sharks themselves, particularly their size and the number competing for one hooked fish.

Many anglers tend to celebrate when they catch fish. Others simply wait several minutes before retrieving the caught fish. According to the government, it’s possible to mitigate shark bite-offs through rapid retrieval. Together with deterrent devices, heavier fishing lines, and electric reels, shark depredation can lower in numbers.

Research has also discovered that sharks arrive 15 to 30 minutes once you start looking for fish. Although it’s slightly frustrating, moving to another spot within that time frame can reduce sharks from taking your catch. It would also help if you relocated to a different fishing area after your catch was just ravaged by a shark.

Studies are conducted to prevent further problems, especially in the future of recreational fishing in WA. That’s why the government has decided to implement licence fees, which are used to fund the studies. The goal here is to ensure fishing remains safe, sustainable, accessible, and of course, fun for Western Australians.

If you’re interested in helping, there are several organisations motivated to prevent any mass shark or aquatic animal killings. For example, the “Stop the WA Shark Cull”, spearheaded by the Australian Marine Conservation Society and Humane Society International, encourages West Australians to sign the petition against the end of the shark killing ban. An online letter will be sent to WA’s fisheries minister to reject the cull.

Another is Envoy Films’ No Way WA! The company released its letter to the fisheries minister, which you can also sign if you wish to participate in putting an end to the proposed shark cull.

With the ongoing research, options, and assistance, shark depredation in WA can be managed without harming sharks and other aquatic creatures.